What employers need to know about training staff and staying compliant

With new federal rules requiring employers to report serious work-related accidents faster as well as keep new injury and illness logs, building service contractors and facilities managers need to have policies and training in place to meet the new requirements.

As of January 1, 2015, the U.S. Labor Department’s Occupational Safety and Health Administration (OSHA) began requiring employers to report all work-related fatalities within eight hours of occurrence. All work-related inpatient hospitalizations, amputations, or loss of eyes must be reported within 24 hours. These new regulations replaced the old rule that only required employers to report work-related fatalities or hospitalizations if three or more employees were killed or injured in the same incident.

Additionally, a new recordkeeping regulation requires companies with 11 or more employees to prepare and maintain records of serious occupational injuries and illnesses using a new tool called the OSHA 300 Log.

The new rules are meant to help employers, workers, and OSHA evaluate the safety of a workplace and understand industry hazards in order to better prevent job-related fatalities or injuries, according to the agency’s website.

Since information has to be reported much faster than before, employers need to be sure employees at all levels know what to do in the event of a serious accident, said John Poole, an Atlanta-based OSHA trainer and consultant. “The key is that as an employer, you need to make certain someone is calling into OSHA,” he said. “Training on that should go throughout an entire organization—not just upper management.”

Many companies likely have a plan in place to report deaths or serious injuries to OSHA, but the person responsible for handling it will likely differ depending on company size. In large companies, the safety officer or human resources staff might need to be contacted so they can file the report to OSHA. For small companies, it could be the responsibility of the owner.

Building or facility owners would rarely have to contact OSHA to report injuries or fatalities, unless the worker hurt or killed on the job works directly for that organization. However, when a facility owner hires an outside cleaning or maintenance crew, or when a building service contractor brings in other service providers to help complete a job, reporting can get complicated.

Ultimately, it’s up to an employee’s direct employer to contact OSHA if an incident occurs. But any company that subcontracts out the work—whether a facility owner or a building service contractor that asks another maintenance company to take on one of their jobs—could still face some questions, according to Bill McGarvey, director of training and sustainability for the Philip Rosenau Co., Inc., in Pennsylvania. OSHA officials might want to know, for instance, what type of task the facility owner or company that outsourced their work was asking the injured individual or team to complete.

Similarly, any company reporting an injury to OSHA would want to communicate the incident to the facility owner or contractor that hired them, said Mark Catlin, the occupational health and safety director at the Service Employees International Union. That’s especially true if the danger that caused an injury could extend to anyone else inside the facility. For example, if a chemical spill caused a member of a cleaning crew to lose an eye and the situation could still pose a threat to anyone else entering the building, facility owners need to be made aware of it.

Many companies already have a plan in place to report deaths or serious injuries to OSHA since they were required to do it before, only on a slower timeline. But the new recordkeeping rule could require training for some companies, Catlin said. “A lot of employers have been exempt from keeping the ongoing logs of injuries and illnesses … [so] that is going to be new to many,” he said.

While keeping logs of injuries and illnesses might sound tedious, the rule is meant to help employers to spot problematic trends or patterns in their current systems. If there are reports of skin rashes, for example, it might let an employer know there’s a problem with a new cleaning product irritating workers’ skin, Catlin said. Or if a new piece of heavy equipment is introduced and it’s causing a lot of back injuries, employers can better spot that trend through reporting.

Being able to identify problems like that is especially important for larger companies with cleaning crews working in different buildings, he said. And while most companies are protected from lawsuits through their state’s workman’s compensation laws, good recordkeeping could help to prevent fines or other punishments.

Employers should have clear records of all workplace incidents, even if they’re minor, McGarvey said. They should also document the steps they took to prevent similar accidents or illnesses from happening over and over. Employees have the right to a safe workplace, which means management has a responsibility to look at their records to try to prevent mishaps, he added.

In the event of a death, recordkeeping that shows an employer recognized a problem area and tried to fix it can be vital, McGarvey said. “Everyone talks about OSHA fines, but the reality is that CEOs are sitting in jail because people have been killed on the job.”

Since certain events now need to be reported to OSHA within hours, it’s important that employees know who to contact in the event of an emergency. That becomes more of a challenge for small cleaning companies that send a one-man crew to clean a bank or office building alone overnight, Poole said. “Employers have to think about these gaps,” he said. “If you have one guy going into a clinic to clean it overnight, someone needs to follow up.”

Catlin said employers also need to make sure employees understand the importance of reporting incidents. Some employees might be tempted to hide an injury that occurred on the job for fear of retaliation, or they’ll feel they’re doing their employer a favor by covering it up.

Direct supervisors need to convey the importance of good reporting, Catlin said. And the new requirements should be integrated into an existing health and safety plan.

Having a safety plan that is well-enforced and a priority for management will go a long way in preventing future accidents. “Everyone goes ‘Keystone Cops’ when an accident happens,” Poole said. “But the best defense is a trained crew. …There needs to be an established playbook.”

McGarvey said training should happen “early and often” so employees know what is expected of them. No new worker should go out on a job until they’re trained up, and from there, training should continue throughout their time with the company.

Training can happen in a number of ways. It can be informal through “toolbox talks” prior to the start of a shift, McGarvey said. Employers also need more traditional training that’s held annually through interactive classes, Poole said, and employees should be required to show that they understand what they learned.

That’s an investment companies have to be willing to make, Poole said. And cleaning and maintenance companies can take additional steps to document important information.

It’s not enough to say you’ve trained employees to follow reporting and safety rules—every employee should submit a signed document whenever they attend required training, Poole said. And if there are employees who are not following safety rules, companies should document that as well, McGarvey said. “Employees share some of the responsibility when it comes to maintaining a safe environment,” he said. If OSHA has to investigate a mishap, that shows employees face discipline if they don’t follow safety rules.

While some cleaning and maintenance companies struggle with high turnover rates, demonstrating a commitment to safety can go a long way in making employees feel good about where they work. Safety should never be optional, McGarvey said, and it’s important to have a strong training program that supports that mindset. “We have a moral obligation to try to give people a safe work environment,” he said. “At the end of the day, it’s about sending people home safe and sound.” Journalist Based in Washington, DC.

Gina Harkins is a journalist based in Washington, DC. She holds a master of science in journalism degree from Northwestern University. 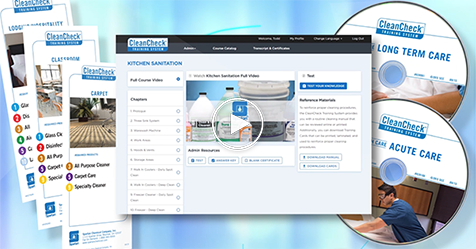 Americans Not Disinfecting Properly Amid Pandemic

Previous Article Where Did I Put That? Next Article Training for Sales and Estimating
Back to All Articles
Navigating OSHA’s New Reporting Requirements
Share Article
Subscribe to CMM